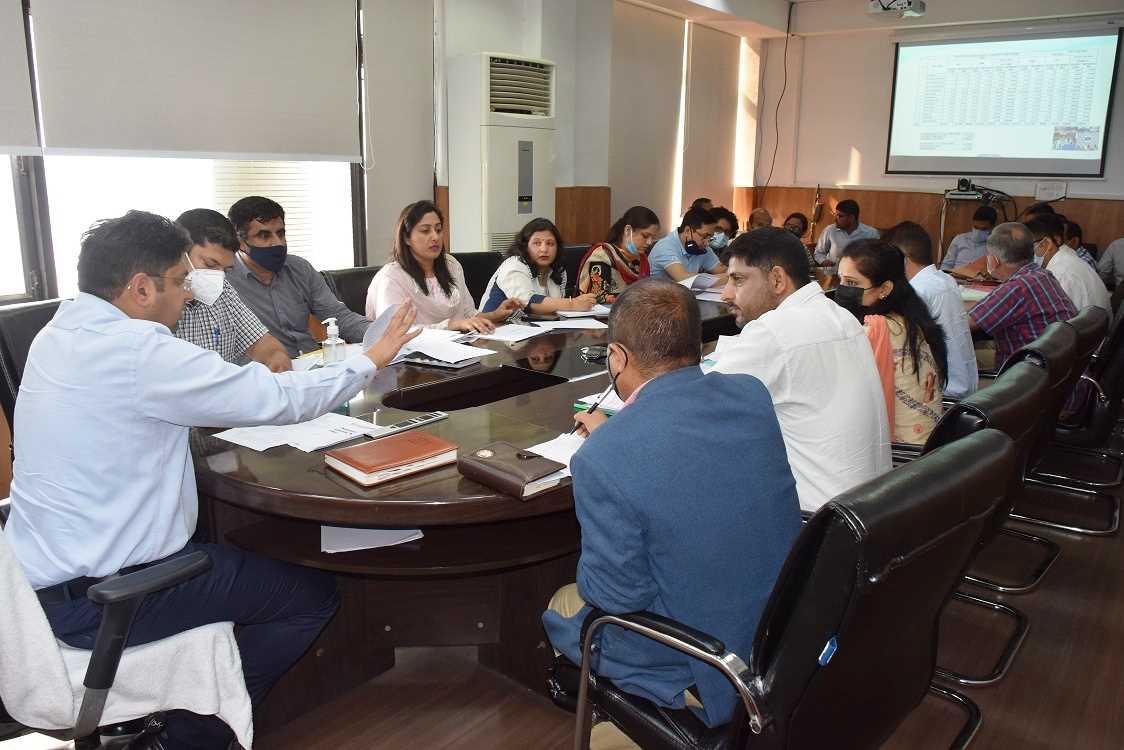 The Divisional Commissioner, Dr Raghav Langer, today reviewed the implementation and annual achievements of the Beneficiary Focused Flagship Programs, here during a meeting with Heads of Departments and Deputy District Commissioners of Jammu division.

The heads of departments made a detailed presentation of the respective programs and informed the Div Com of the progress.

While reviewing the programs of the Department of Rural Development, the Director informed that the department is implementing MGNREGA, Awas Plus and PMAY programs. He said the department generated 235.31 lakh man-days under MGNREGA in the fiscal year 2021-22.

The Div Com has directed the department to clear material liabilities in the current fiscal year.

Regarding PMAY, he was informed that a total of 75,119 houses have been built under the program so far. The Div Com highlighted the need to fill the gaps between the 1st, 2nd and 3rd installments to facilitate the beneficiaries.

While reviewing the implementation of industries programs, it was informed that the department sanctioned 2002 cases in the current year providing employment to 6587 people, while 148 industrial units received incentives under the central package during the same period, including a 100% subsidy Insurance policy.

Likewise, the Deputy Director General of KVIB informed that the Board has sanctioned 2242 cases under the PMEGP and 376 under the rural employment creation program in Jammu and Kashmir.

While reviewing the performance of the social welfare department, the director informed the divisional commissioner that under the social security schemes, more than 63411 cases have been sanctioned this year, including old age pension, l disability and widow’s pension, while the department also sanctioned more than 88,255 scholarship cases in the districts of the division into pre-matric and post-matric categories.

The Div Com has urged officers to work in a missionary mode so that the benefits of the department’s programs aimed at uplifting the weaker sections, the aged and infirm, the disabled and students will trickle down to the masses. He also highlighted the need to educate ZEOs and CEOs about scholarship programs and ensure that no eligible beneficiary is left behind.

While reviewing the implementation of agricultural schemes, it was informed that more than 48.27 lakh farmers have made payments under the PM KISAN scheme in the division, while 5.83 farming families lakh farms were recorded this year under PM KISAN and more than 40037 under Pradhan Mantri Kisan Maandhan Yojna (PM-KMY).

Under the Kisan credit card scheme, 18,556 farmers have benefited from loan facilities.

While reviewing the progress of Fisheries Department projects, the Joint Director of Fisheries informed that the department had provided financial support to 498 beneficiaries under PMMSY for the construction of low-cost housing units, 21 for the trout cable car, while livelihood/nutritional support provided 3650 beneficiaries.

While reviewing the progress of Urban Local Bodies Department projects, the Director informed the Divisional Commissioner that the Individual Household Latrines (IHHL) under the Swachh Bharat Mission Program for Citizens of Urban Local Bodies (ULB) , the department has constructed 18803 toilets while 166 community/public toilet complexes have been constructed under the Swachh Bharat mission and 3132 cases have been sanctioned under the PMSVANidhi program.

While reviewing the Rural Livelihoods Mission in Jammu and Kashmir, it was informed that more than 5757 SHGs have been formed in the districts of the division in the current year, while 2668 groups took advantage of the mission’s RF.

Div Com said these flagship programs aim to improve the lives of the poor in UT, especially in rural areas. “The programs specifically envision providing jobs and livelihoods to the poorest of the poor, therefore, implementing agencies need to focus on their implementation in the good spirit of these programs,” he said. he adds.

He called on relevant officials to exert special efforts to ensure 100 percent saturation of beneficiary-oriented programs in the districts, with special emphasis on achieving 100 percent coverage.

The meeting brought together in person the Directors of FCS&CA, Industries, Horticulture, Sheep Husbandry, Social Welfare, Rural Development Department, Urban Local Bodies, School Education Department in plus senior officials from Health, Sericulture, Agriculture, Livestock, NRLM, KVIB, Fisheries and other relevant departments while all Deputy Commissioners of Jammu Division as well as District Officers have participated in the meeting via videoconference.